Utopia of green tea, Shimada city in Shizuoka. Shizuoka is a best tea-growing district in Japan.

The natural environments such as the climate and geographical features were suitable for cultivation of the tea, and Shizuoka has been known as an excellent tea-growing district for a long time. Tea became the major export of our country especially by the opening of Yokohama port in 1859. Tea plantations were opened in various places throughout Shizuoka, and the tea business greatly accomplished development. After that, with new technological innovation for improvement of breeding and the rationalization of production, Shizuoka occupies 50% of tea production and 70% of distribution.

Shimada city is the center of tea growing district in Shizuoka, where Kanei Hitokoto Seicha, Inc. has been in tea business for 150 years since its establishment.

Because the river mist of morning and evening block the direct rays of the sun in the mountains of upstream of Ohi River, good quality green tea was cultivated from old days. On the other hand, with bright direct sun light in downstream of Ohi River, tea leaf is grown with full of delicacy of nature. The feature of this area’s tea is somewhat deep but mild taste made with “Fukamushi” method. We would like to have you taste these two kinds of splendid tea brought up by blessing of nature. 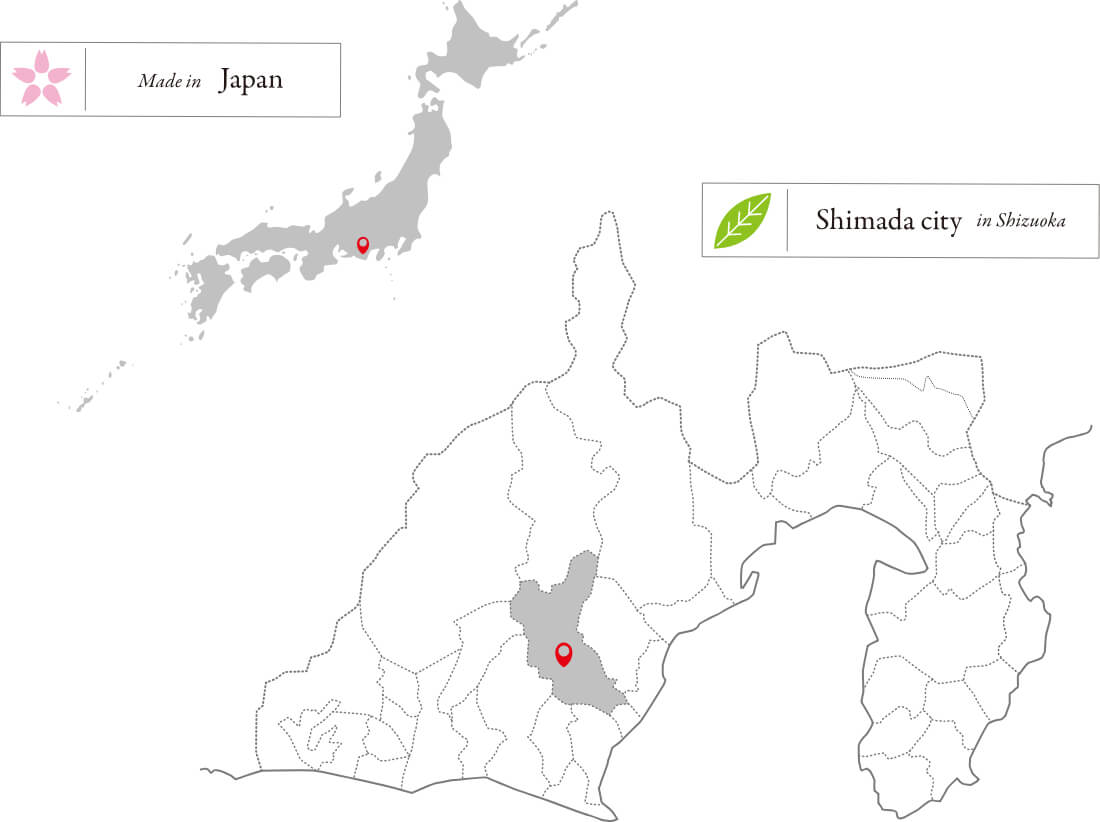 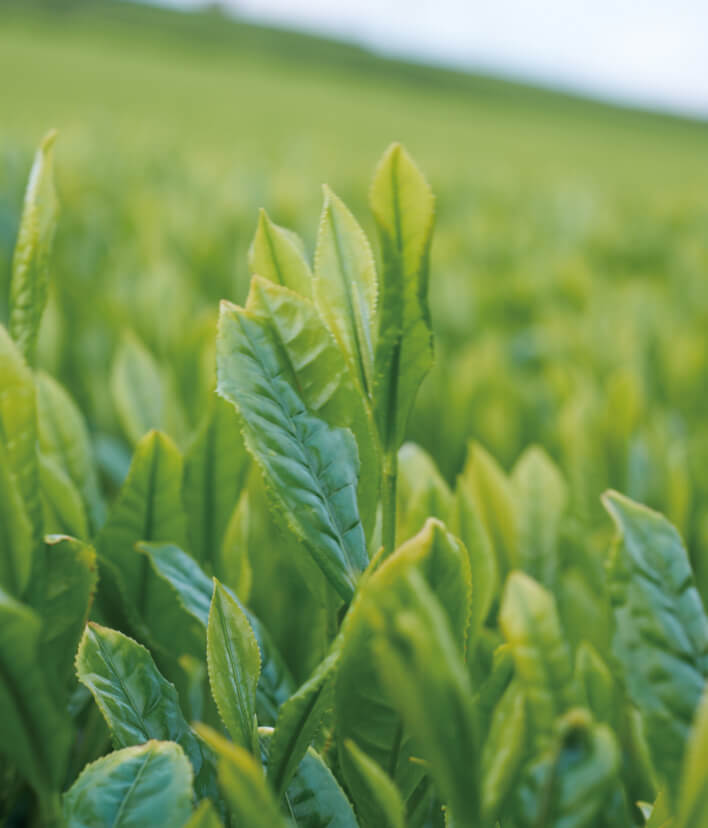 Tea making is to coexist well with nature. We receive blessing of nature. We concentrate our power to make the best soil condition every year. It is because we believe that the soil brings up healthy and strong tree and ideal tea leaves by overcoming severe environmental changes. By using mainly organic fertilizer, we carefully work on preventive pest control, plowing of soil deeply, grass mulch; world inheritance tea leaf agricultural method, and so on. And when sprout send out buds, the tea plantation looks as it is covered with yellowish green carpet. When wind blows, the tea plantation is filled with sweet aroma and we strongly feel joy and sense of relief. This is the proof of the healthy and high quality tea leaves and it is the reward to us for bringing it up with a lot of care. 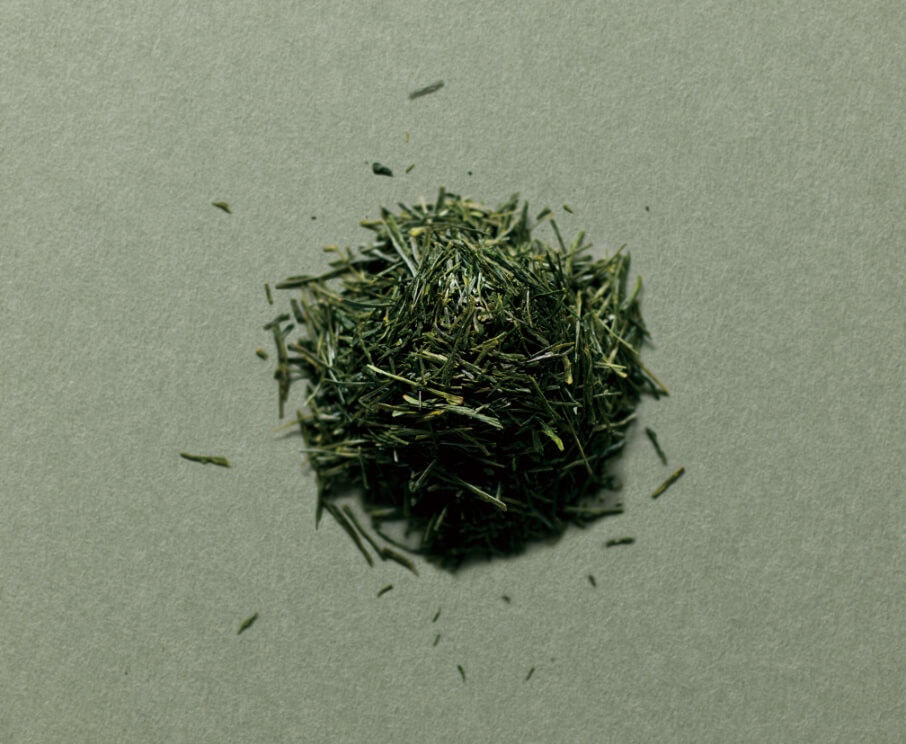 “Tea leaves do not lie. It speaks to us quietly.”

Tea leaves are like human. There is no one that is same. At a glance, we can tell how tea growers were caring for tea leaves. Tea leaves speaks their personality quietly to only who is willing to listen carefully. Tea is a creature. As we care, tea meets our expectation. High quality tea leaves have good color, aroma and the touch and attracts us, tea craftsmen. The soft delicate sprout picked only once in a year is very mystical. If we listen to personality of each one quietly, it teaches us how they want to be made best use of it. We, tea craftsmen with dedicated tea farmers who share the same feeling are making our best effort to understand the tea at all time and working hard to make best tea that get to people’s heart.

“We talk with tea and appreciate blessing of nature”

Tea making is not a science. It is a profound thing including culture and art lined sensitivity and dealing with blessing of nature of variety of personality. To distinguish the quality of tea, the five senses that are sharpened by long training are required. We check the color by eye, aroma by nose, flavor with tongue, sound by ear and the touch by hand. However, genuine tea craftsman have much more. Sensitivity to take in voice of living tea, in other words, the sixth sense is required. Expecting tea cannot be made unless we feel as we talk with tea. Swelled head is taboo in tea making. Tea is created by nature and we get interrelated to tea by keeping it alive. Genuine tea craftsman never forget modest feeling and the passion toward tea.